(video) Barrett on Originalism: Constitution "does not change even if popular attitudes wax and wane" 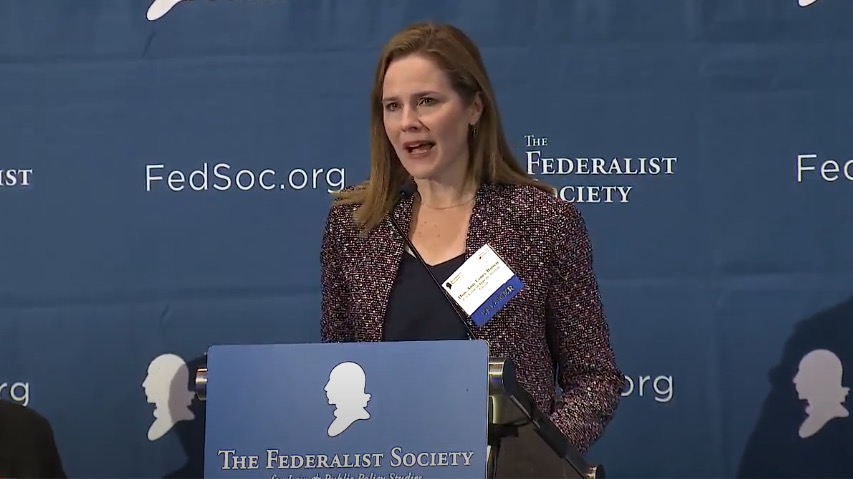 Judge Barrett spoke on Originalism at 2019 Federalist Society panel. Here is the video:

At bottom, I think one ought to be an originalist because the Constitution, no less than a statute, is law. It’s not merely a statement of our aspirations, as some have described it, nor, as others have said, is it simply a symbol of our political culture’s commitment to the idea of fundamental rights. Those things are true of the Declaration of Independence, a document that we revere. But the Declaration does not bind us, and the Constitution does. It’s more than an expression of political ideals. It has the force of law.

Why is the Constitution law? As an initial matter, the original Constitution, along with each of its amendments, was adopted in an exercise of popular sovereignty through a process self-consciously designed to create authoritative law. And the authoritative law that the people created is the text that they ratified. That text is what satisfied the onerous process of ratification. That is what has supermajority buy-in. And if a constitutional provision became authoritative because the people consented to it, then we need to know what they consented to. And to discern that, we look at the meaning that the text had at the time it was drafted and ratified.

Two features of our Constitution make that possible. The fact that it is written enables us to identify the content of our constitutional commitments, and the fact that the Constitution and its amendments become authoritative through a formal process enables us to put the text in its historical context. The same isn’t true of an unwritten constitution, for example, like the British Constitution. If fundamental law grows through a largely unwritten tradition, it is difficult to pin down its precise content, much less to isolate the moment at which any given principle becomes fundamental law.

Our Constitution is structured differently. It’s meaning was fixed at the time it was written and formally adopted, and it stays the same until it is lawfully changed. And this fixation of the text is part of our constitutional design because it sharpens the constraint. The content of the commitment does not change even if popular attitudes wax and wane. Even if a majority of the country thinks that free speech is passé, the First Amendment stands.

Arguments that the text is authoritative raise a number of objections, but one common one is the dead hand objection. We were not among the people who ratified any of these constitutional provisions, nor, when some of these constitutional provisions were ratified, would many of us have been able to participate in their ratification. So why should we be bound to the text as those who ratified it understood it?

This is more than an objection to originalism. It’s an objection to the Constitution’s status as law. On this view, the Constitution has no claim on us because we didn’t participate in the process of its adoption. But this idea doesn’t really have purchase in real life. So we’ve seen criticisms recently of the Electoral College and of equal representation in the Senate. But we don’t see serious proposals to simply abandon the Electoral College in the next election or to seat more than two senators in California.

We wouldn’t make either change without a constitutional amendment because, in our ongoing society, each generation treats the law as authoritative until it is lawfully changed. And the constitutional law that is handed down is — I’m going to borrow this from Professor Stephen Sachs — the founder’s law plus lawful changes. To figure out what the law is, we go to the source. We identify the meaning of the text that the people ratified and account for any lawful changes that have happened since.

Now, it’s indisputably true that a constitutional change is hard to come by. The hurdles of the Article V process are steep. Does the difficulty of that process mean that we’re stuck with the Founders’ law no matter how much we might want to change it? Or put differently, is the Constitution a straitjacket? No. For one thing, it bears emphasis that the Constitution itself leaves plenty of room for change, political, legal, social, and otherwise. The Constitution is less than 6,000 words, and it makes no attempt to regulate every aspect of American life. It leaves change largely in the hands of the states and of the political branches of the federal government.

The Constitution may be hard to amend, but legislation is easier to pass. And state constitutions are much easier to amend than our federal Constitution. As Judge Sutton has reminded us, we have 51 imperfect solutions, not one. Our Constitution is not supposed to be the mechanism by which we accomplish every change, even significant ones.

Now, notwithstanding the ways in which the Constitution leaves us flexibility, there is no denying that it also imposes constraints. After all, entrenching certain values and structural features of government is the point. Is that reason to say that we ought not be bound by this law, including by the mechanisms that it proscribes for change? Again, no.

The difficulty of constitutional amendment is, in my view, one of the things that enables us to hang together as a country. Amending the Constitution is difficult not simply because Article V makes it so. It’s because the size and diversity of our country makes supermajority buy-in very difficult to achieve. But perhaps that’s okay. Having fewer rather than more national and entrenched rules, thereby permitting regional differences to flourish, is necessary in a country like ours. It’s remarkable, really, that the people of Louisiana and California, of New York and New Mexico are able to live under one constitutional roof.

We compare ourselves to Western European countries. But consider that Germany, closest to us in size, is roughly 138,000 square miles and has a population of roughly 83 million. The United States has a population of roughly 330 million and is roughly 3.8 million square miles. While I haven’t looked at the statistics, I think it’s a pretty safe bet that we have more racial, cultural, and religious diversity than any of our Western European peers or our Canadian neighbors. The Constitution that we have may not be the one that we would adopt if we started from scratch with our own constitutional convention today. Then again, I’m kind of skeptical that we would be able to agree on any constitution at all today. But we do agree on the one that we have, as reflected in our continued acceptance of it.

We treat our original Constitution as law, and we are right to do so. If we abandon it, if judges or elected officials seize the authority to change it outside of the lawfully proscribed process, then we’re imposing constraints on the people to which they have not consented. And I think that undermines the ability of the citizens of our very large and diverse country to live peaceably together under one constitutional roof.

So I’ll sum up by saying this: In keeping with the theme of we’re all originalists now, the really interesting questions are what are the mechanisms for lawful constitutional change, not whether the Constitution binds. And I think questions about identifying the level of generality at which provisions are written and the authority of precedent and how one builds out the more general language of the Constitution is where a lot of the fruitful debate is currently occurring. Thank you.